Let us pray in thanksgiving for the life of Fr. Gerald F. Cavanagh, SJ, who died on November 8, 2022 at Colombiere Center in Clarkston, Michigan. He was 91 years old. May he rest in peace.

Jerry was born on September 13, 1931 in Cleveland, Ohio to the late Gerald Francis and Margaret (nee Gilmore) Cavanagh. He was the brother of Mary Angela (Tom) Lewis and Edward (Micheaux) Cavanagh. Before entering the Society, he attended Gesu Grade School, graduated from Saint Ignatius High School (Cleveland), and earned a bachelor’s degree in engineering administration from Case Institute of Technology (now Case Western Reserve University) in Cleveland. During and after his college years, Jerry was heavily involved in the Newman Club for Catholic students at non-Catholic universities. During college, Jerry was president of the Cleveland International College Newman Center for two years and, throughout his life, he was a proponent for Jesuits working in Newman Centers at non-Jesuit universities.

After college and before entering the Society, Jerry made landing gear for aircraft. He entered the Chicago Province of the Society of Jesus (at the Milford Novitiate) on September 15, 1953 (and became a member of the Detroit Province when it was formed in 1955), was ordained on June 18, 1964 at Colombiere Center in Clarkston, made tertianship in Dublin, Ireland (1965-1966), and pronounced final vows on May 30, 1976 at St. Ignatius Chapel on the campus of the University Of Detroit Mercy.

While in the Society, Jerry earned a Licentiate Degree in Philosophy (1959), a Master’s Degree in Education (1959), and an master’s of business administration (1958) from Saint Louis University. He earned a licentiate degree in Sacred Theology from Bellarmine School of Theology in North Aurora, Illinois (1965). In 1970, Jerry earned his goctorate in business administration (in management) from Michigan State University. His doctoral research, which was done at the Research Institute in Cambridge, Massachusetts (1968-1970), focused on the creative ideas that the electrical industry was coming up with in the area of equal employment (i.e., employment of members of minority groups) and his doctoral thesis was titled “Black and White Workers Views in Three Industrial Plants: View from the Grassroots”.

During regency, Jerry taught physics, math, and speech at Loyola Academy in Wilmette, Illinois (1959-1961). After earning his doctorate, Jerry was a professor of management at Wayne State University in Detroit (1970-1979) and held the Dirsken Chair in Business Ethics at the University of Santa Clara (1979-1980) before he was missioned to the University of Detroit Mercy (UDM). For more than four decades, Jerry ministered at UDM where he was: a professor of business management (1980-1988); academic vice-president and provost (1988-1995); the holder of the Charles Fisher Chair of Business Ethics (1995-2004); the interim dean of the College of Business Administration (2008-2010); and a professor of management (2010-2022). Jerry worked at UDM until shortly before his death.

Jerry was a devoted Jesuit and priest. He was always optimistic, had a positive outlook, and had a zest for life. He had a great love for the University of Detroit Mercy and supported the university (and those associated with it) completely. He faithfully attended UDM theater and sports events — especially the basketball games — where he loved supporting students and visiting with alums. As with most people, Jerry had some idiosyncrasies — including a very distinctive laugh and he often would only button every-other shirt button (to save time) — but was loved and appreciated by all those he encountered. Before entering the Society, Jerry realized he liked engineering, but wanted to work with people more than he wanted to design things.

Jerry not only influenced students in the classroom. He was a much loved and long-time advisor for Alpha Phi Omega, the service fraternity at UDM. He loved taking groups of students on weeklong backpacking retreats to the national parks at the end of the academic year. He and his long time colleague Mary Lou Caspers sought out emerging leaders and helped build up a cohort of student leaders over the 40 year they led this retreat.

Beloved and admired by students, colleagues, and alumni, Jerry received UDM’s first Distinguished Faculty Award in 1998. In 2019, he received the UDM College of Business Administration’s Lifetime Achievement Award and was inducted into its Hall of Honor.

Father Gilbert Sunghera, SJ, had this to say about Jerry:

The thing I will miss most about Jerry was the way he always welcomed me home when I returned from a trip. We lived across the hall from each other, and he always made a point to come over, and with that jovial laugh and winning smile, he would just simply say “welcome home, we missed you”. In all honesty he was one of the major reasons I came to back to Detroit Mercy after ordination. Nothing seemed to get him down or depress him, and with that kind of spirit who could loose. I suspect St. Ignatius had to do the same for his companions when they felt burdened. As they say Jerry was a Jesuit’s Jesuit.

Father Tim Hipskind, SJ, had this to say about Jerry:

For many years, Jerry was in charge of getting movies for the UDM community on Friday nights. He took his job quite seriously. He would read the New York Times Review to find the best movies. Then he would persuade the Detroit Mercy Library to buy them, so he could get the movies for free. When the library no longer purchased movies, Jerry convinced the community to switch to watching the PBS News Hour, which is still a community practice. He would also go over to the athletics department at the beginning of the season and get tickets for the Jesuit community. Early on this was easy, but in recent years he had to do more and more persuading to get the tickets for free. If you are picking up a theme here, Jerry was quite a spend-thrift. Further proof: He used to cut his own hair as well to avoid that cost.

Click here to read an interview with Jerry that was published in the Detroit Catholic.

Click here to view a video of Jerry speaking at a Jesuit Friends and Alumni Network Detroit event in 2019.

In lieu of flowers, a donation can be made to the Cavanagh Fund for Ethical Solutions to Social Problems at the University of Detroit Mercy here.

Both the Wake and Mass of Christian Burial can be viewed via livestream. Parking is available at the University of Detroit Mercy. 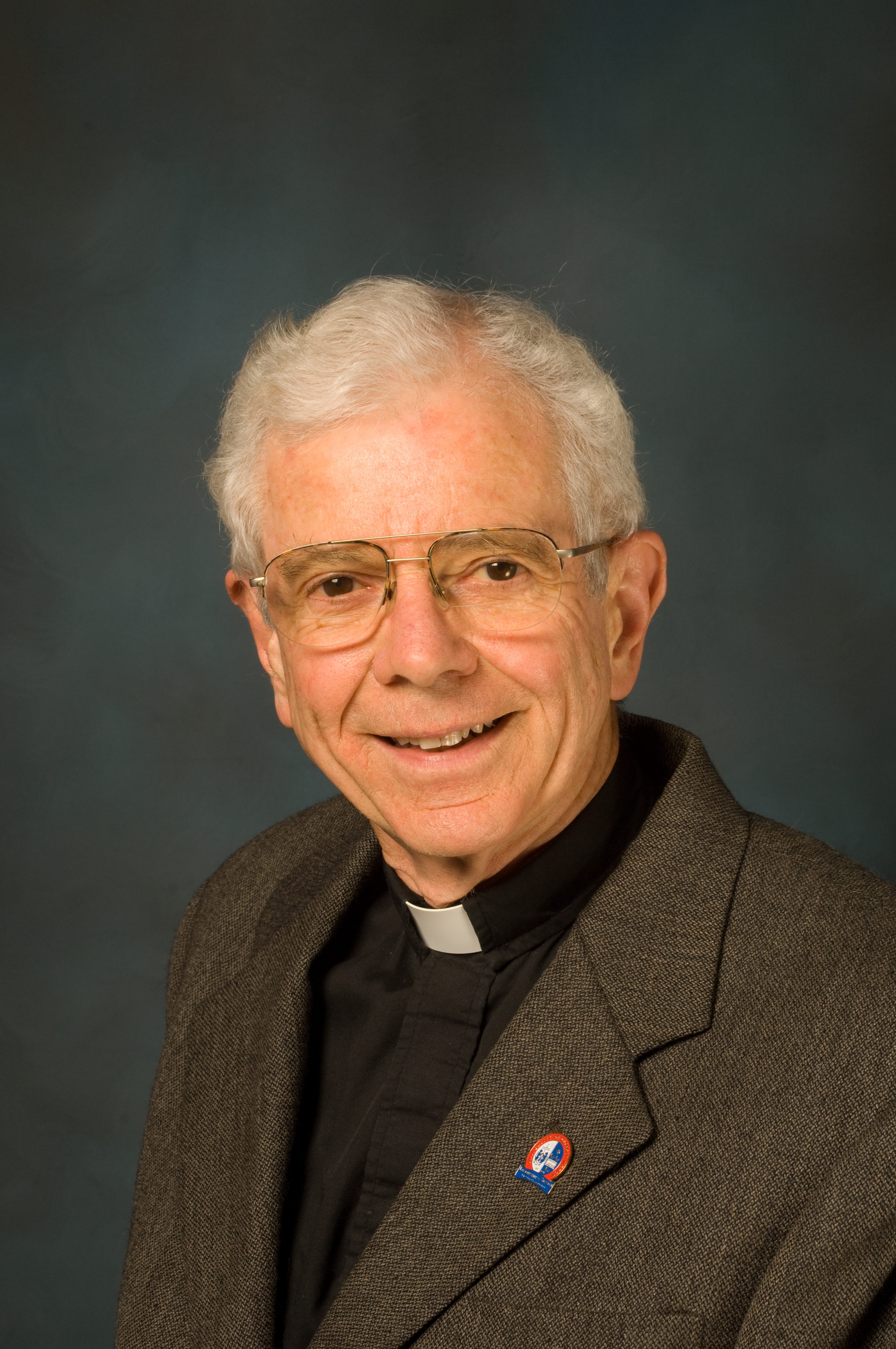