Jesuit Father James E. Fitzgerald died on Sept. 12, 2019, at St. Camillus in Wauwatosa, Wisconsin. He was 84 years old. He is survived by his brother, Thomas (Marilyn) and sister, Betty (Dr. James) Quinn, both of Omaha, and nieces and nephews.

Born in Omaha on June 9, 1935, Fr. Fitzgerald graduated from Creighton Preparatory School before entering the Society on Aug. 17, 1953. He had the usual Jesuit course of studies at St. Stanislaus Seminary, St. Louis University, and St. Mary’s College. He was ordained on June 9, 1966, made tertianship in Decatur, Illinois, and pronounced his final vows on Nov. 6, 1971 at the University of Santa Clara.

During regency, Fr. Fitzgerald taught history at Campion Jesuit High School, Prairie du Chien, Wisconsin, and after ordination spent some years in graduate studies in education at Stanford University. For most of his years of active ministry Fr. Fitzgerald worked in the advancement offices of Creighton University (1968-1971 and 1979-1983) and Marquette University (1985-2002). In 2008 he moved to the St. Camillus Jesuit Community, where he remained until his death. He was preceded in death by his twin brother Robert who died in 2016. Fr. Fitzgerald and Bob entered the Society together and were ordained on the same day. 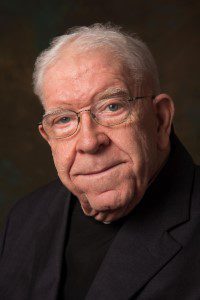