Jesuit Father Joseph R. Laughlin died on May 27, 2013, at age 86. He was born on Aug. 31, 1926, in Hyde Park, Mass., where his father Thomas, a master boilermaker in the Boston Navy Yard, had also been born.  His mother Mary Ellen Kelly was born in Ballinasloe, County Galway, Ireland, and as a young woman came in steerage to this country.  Fr. Laughlin had eight brothers and sisters and was the sixth child.

Though money was short and his mother was often bed-ridden from asthma, Fr. Laughlin recalls a loving and deeply religious upbringing.  A clear memory was of his father coming to the children’s bedsides each night and making a sign of the cross on their foreheads with his thumb.  Fr. Laughlin himself was a sickly child but he soon developed the family passion for sports, especially hockey and baseball, even earning pocket money in a park league while still in high school.

Early on, he formed the desire to become a priest, inspired by the preaching of Fr. Crowley, the pastor of Most Precious Blood in Hyde Park. The Sisters of Charity of Nazareth at St. Catherine’s, the parish school, encouraged him to take the exam for Boston College High School.  When he didn’t win a scholarship, and the family couldn’t afford the $120 tuition, his mother visited the rector of the school and asked for help.  He agreed to accept $9.00 a month instead.  At BC High, Fr. Laughlin fell under the influence of three Jesuits—Robert Sheridan who drilled him in public speaking, Lawrence Herne his Greek teacher, and Eugene McCarthy, a scholastic, who tutored him when he fell behind in Greek because of the death of his older sister Mary from a kidney infection.

Fr. Laughlin entered the noviatiate at Shadowbrook on Aug. 14, 1944, and spent the next four years there. In 1948 he went to Weston College to study philosophy. His first year of regency was spent teaching history at Fairfield Preparatory School and then for two years he taught at Boston College High School.  He returned to Weston to study theology and was ordained a priest there by then Archbishop Richard Cushing on June 15, 1957. After his theological studies he did tertianship at St. Robert’s Hall in Pomfret, Conn.

For the next eighteen years Fr. Laughlin would teach religion, English, and history at Boston College High School.  He also helped out in prison ministry and gave retreats on weekends for students and increasingly for the charismatic community.  He worked with the Urban Sisters Task Force and in the family social apostolate.  In 1976, he earned an MA in educational psychology from Boston College, reinforcing his lifelong interest in counseling.  After several years ministering to the Native American community in Maine, he worked full-time with the charismatic community, then spent a year working with Food for the Poor in Miami.

In 1990, Fr. Laughlin returned to the Boston area and was again based at BC High, where he helped out in local parishes. He went to Campion Center in 2002 to be the assistant to the Minister and continued working occasionally in parish ministry.  In 2009, his health began to decline and he spent the last few years praying for the Church and the Society. 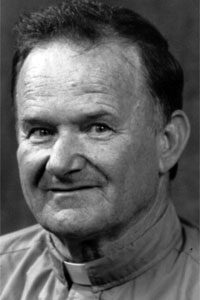