Father Sabo, the son of immigrant parents from Czechoslovakia, was born on June 16, 1945, in Bridgeport, Connecticut. Before entering, he graduated in 1963 from Fairfield College Preparatory School and earned a bachelor’s degree in Russian language and literature from Fairfield University (1969).  He entered the New England Province of the Society of Jesus on September 6, 1969, at Shadowbrook in Lenox, Massachusetts. He was ordained on June 21, 1980 at St. Joseph’s Chapel on the campus of the College of the Holy Cross in Worcester, Massachusetts, and professed final vows on June 16, 1988 at the College of the Holy Cross.

Jerry earned a master’s degree (1974) and a doctorate (1978) in Slavic languages and literature from Yale University in New Haven, Connecticut. He also earned a master’s of divinity from Weston Jesuit School of Theology (1980).

Jerry was a professor in the honors program at Boson College (1978-1981) and a professor at the College of the Holy Cross (1980). In 1981, Jerry was missioned to John Carroll University where he worked (for four decades) until his death. He died shortly after completing a set of mid-term examinations. He was rector of the Jesuit community from 2007-2013.

Jerry was proud of his Slavic ethnic background. In 1977 Jerry visited John Carroll University for the first time and fell in love with what he saw and heard about the university.  When Fr. Thomas P. O’Malley, SJ, was named president of John Carroll in 1979, Jerry told Fr. O’Malley (whom Jerry had known from his early years as a young Jesuit in New England) that he “was very interested in teaching at John Carroll because it was a Jesuit school and was in an area where there was a significant Slovak population.”  Jerry’s wish came true in August 1981.

Jerry often went to Slovakia in his early days to accumulate Slovak books and amassed a gigantic collection (now in the basement of Schell House). He often helped Slovak scholars come to the United States and assisted them in their projects.

Jerry’s expertise was in Slavic languages, specifically Russian, Slovak, and Czech, but he was always one to downplay the fact that his doctorate was from Yale. In 1989 Jerry transcribed from the New England Province to the Detroit Province after it became clear to him that John Carroll would be his home for life. Part of Jerry’s attraction to John Carroll is the fact that it is one of just two universities in the United States where Slovak is taught as a regular undergraduate course. (And Jerry was asked to recommend the professor for Slovak at the other American university!)

Through his classroom presence and his multitude of stories, Jerry captivated the minds of his students while he taught Slovak, Russian, and Eastern European Literature in Translation.  He enjoyed teaching, and many students took his courses only because he was teaching the rather than for the content, being amazed at their professor and his sarcastic wit yet easy grading style. One student noted, “He is a great guy and professor and seems tough but really is not and cares about students a lot “while another noted “I’ll let you in on a secret, he wants you to succeed.”  At the time of his death, in addition to his normal teaching schedule, Jerry was working on a history of Slovak Literature into the 1840s, much of it religious in nature.

“Besides various articles on Slovak literary topics, another of Fr. Sabo’s major publications is a diplomatic edition of and commentary on an eighteenth-century poetic work of nearly eighteen thousand verses-Hugolin Gavlovič’s Valaská Skola. This publication received the first Slovak Studies Association Award for Outstanding Publication in Slovak Studies on October 21, 1990, presented in Washington, D. C. at the association’s annual meeting.”

Jerry loved going to the Cleveland Art Museum and, in his later years was a regular visitor, offering sweeping tours of the museum’s extensive collection to visiting Jesuits and friends.  As a true grammarian he would quietly at the end of an official tour gently correct the historical or geographical errors of the docent.  He frequently left behind suggestions to improve the museum, and eventually he was placed on a committee to recommend necessary changes and additions.

Jerry was a noted creature of habit.  He loved to hold court at the breakfast table at Schell House sharing his vast knowledge and interests and thoughts on improving the world around him, while preparing his titanic health breakfast which was an archaeological phenomenon as it grew in size with each new health tip. He enjoyed films and eating out, often going back to the same restaurant and predictably ordering the same item.  To celebrate his 50th anniversary in the Society last year, the John Carroll Jesuit Community took Jerry to EDWINS Leadership & Restaurant Institute (a restaurant which Jerry visited often!). 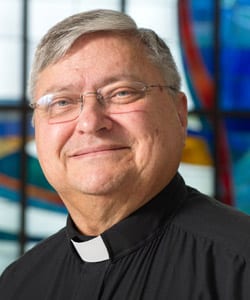