He was baptized at our Lady of Victory Church, Buffalo, N.Y. He completed secondary school at Canisius High School in 1940 and then proceeded to the College of the Holy Cross in Worchester, Mass., graduating in 1944. After one year at Christ the King Seminary, he entered the Society of Jesus on September 7, 1945, at St. Andrew-on-Hudson in Poughkeepsie, N.Y.

Following his first vows on Sept. 8, 1947, he studied philosophy at Woodstock College in Woodstock, Md. From 1951 to 1953, as a Jesuit scholastic he returned to and taught at his alma mater, Canisius High. He was then assigned to Weston College in Weston, Mass., for the study of theology and was ordained to the priesthood on June 16, 1956, by Francis Cardinal Spellman.

After completing his tertianship at Auriesville, N.Y., he began graduate studies in sociology at Colombia University, receiving his doctorate in 1972.

Beginning in 1966 he taught at Le Moyne College in Syracuse, N.Y. He was chair of the sociology department from 1968 to 1979 and from 1983 to 1988. He served as president of the Faculty Senate from 1987 to 1988 and twice was president of the New York State Sociological Association and recipient of its Distinguished Service Award. He is coauthor of “Innercity Private Schools,” a survey of the academic performance of innercity parochial schools.

After many years of teaching at Le Moyne, he became he became Professor Emeritus in Sociology and in 2010 he was assigned to the Jesuit infirmary, Murray-Weigel Hall, in the Bronx to pray for the Church and the Society. 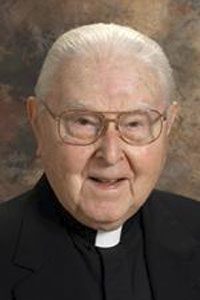