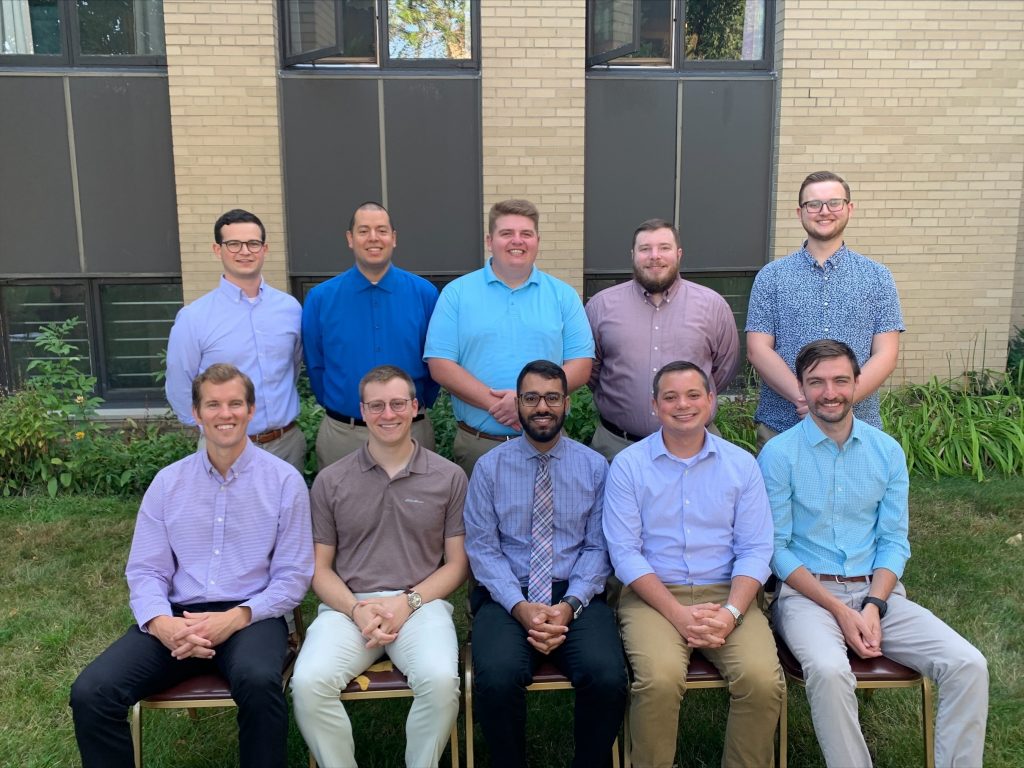 It is with great joy that the Midwest Jesuits introduce the ten men who entered the USA Midwest Province of the Society of Jesus at the novitiate in St. Paul on August 21, 2021. Front row, from left: Scott Fox, Solomon Liebl, Leonardo Rander Asse, Aaron Calton, and Benjamin Rogers; back row: Joseph Ertle, Carl Caceres, Brian Kemper, Ryan Cruise, and Michael Bauer

Michael Bauer, 22, is from Brainerd,  Minnesota. He recently graduated from Saint Mary’s University of Minnesota with a bachelor of music degree. Bauer, along with his mom, older brother, and younger sister, converted to the Catholic faith during his freshman year of high school. Bauer was inspired by his parish priest, and he developed a deep love for his faith. He was actively discerning religious life throughout his college years, learning about different religious orders. He ultimately decided to apply to the Jesuits after reading With God in Russia by Fr. Walter Ciszek, SJ, and The Jesuit Guide to (Almost) Everything by Fr. James Martin, SJ. He also attended a “Come and See” weekend and a week-long silent discernment retreat at the Jesuit novitiate in St. Paul, Minnesota.

Carl Caceres, 32, grew up in Teaneck, New Jersey, not far from New York City. He earned a bachelor of arts in philosophy and theology/religious studies from the University of Scranton and a master of science in student affairs in higher education from Miami University in Oxford, Ohio. He has worked in residence life, campus ministry, and most recently, academic advising. Caceres became acquainted with the Society of Jesus as part of the Special Jesuit Liberal Arts Honors Program at Scranton. He has been profoundly influenced by Jesuit spiritual directors and by getting to know the Jesuits on campus while working at Xavier University in Cincinnati and Creighton University in Omaha. Caceres is a former collegiate tennis player.

Aaron Calton, 29, is from Cleveland. A graduate of the University of Notre Dame, he received a bachelor of arts in theology and Italian language and literature and his master of arts in theology through the Echo Graduate Service Program. He spent the past few years teaching theology to high school and middle school students, introducing them to the Catholic faith in the classroom and on retreats. Calton first encountered Jesuit life and Ignatian spirituality when he attended Saint Ignatius High School in Cleveland and is excited to follow in the footsteps of the Jesuits who formed him there.

Ryan Cruise, 26, was raised in Bettendorf, Iowa. Ryan graduated from Upper Iowa University in Fayette with a degree in financial management. He worked in the agriculture industry for four years as an agronomist’s intern and in supply management at John Deere. Cruise first heard about the Jesuits through the fantastic stories told by his grandfather, who attended Creighton Prep in the 1940s.

Joseph Ertle, 22, is the youngest of six kids and a proud native of the greater Cleveland area. He graduated in 2017 from Saint Ignatius High School where he came to know the Jesuits. Ertle continued learning under Jesuits while studying English at the College of the Holy Cross. His time at HC exposed him to various ministries that allowed him to work inside a hospital and jail, encounter men and women experiencing homelessness, lead peers on retreat and in liturgical ministries, and provide academic and mentorship programming for elementary students of low economic means.

Scott Fox, 34, grew up in Lisle, Illinois, a suburb of Chicago. He studied education at Illinois State University and spent several years teaching. After a brief foray into the world of web development, Fox experienced a strong call to work for God. Following this call led him to a position as a laborer with the Catholic Cemeteries of the Diocese of Joliet and eventually back to his home parish of St. Joan of Arc, where he served as a liturgy coordinator and website manager. He first encountered the Jesuits when a pilgrimage to Our Lady of Guadalupe in Mexico City inspired him to read the story of Blessed Miguel Pro. While discerning his vocation with the Jesuits, he was particularly inspired by Fr. Mitch Pacwa, SJ, and Fr. Robert Spitzer, SJ, at EWTN (Global Catholic Network) and found himself deeply attracted to the spirituality of St. Ignatius of Loyola and the history of the Society of Jesus.

Brian Kemper, 23, was raised in Cincinnati, where he attended St. Xavier High School. The second oldest of four brothers, Kemper stayed in his hometown and attended the University of Cincinnati, earning both a bachelor of business administration and master of science in finance. Throughout college, he interned for The Kroger Co. and Delta Air Lines, was involved in the Greek community, and enjoyed working with students in the Lindner College of Business. During his fourth year in college, he began to seriously discern his call to the Society of Jesus and revisited the spirituality and teachings from his time at St. Xavier.

Solomon Liebl, 23, grew up in Fertile, a small town in northwestern Minnesota. After high school, he entered minor seminary and studied for the Diocese of Crookston. He attended Immaculate Heart of Mary Seminary at Saint Mary’s University of Minnesota for two years before discerning out of formation. He proceeded to complete his bachelor’s degree at Saint Mary’s University of Minnesota, majoring in finance and philosophy. He was first introduced to Ignatian spirituality by his philosophy professors and friends toward the end of college. After graduation, while working as a business intelligence analyst for an industrial supply company, he continued to discern the Society of Jesus.

Leonardo Rander Asse Jr., 27, was born and raised in Belo Horizonte, Brazil’s sixth-largest city. He graduated from the pharmacy school at the Federal University of Minas Gerais in 2017. He continued his studies in Minneapolis at the University of Minnesota, earning a master of science in chemistry in 2020. A convert to Catholicism, Asse had a Jesuit priest as his RCIA instructor, who was a great witness to the Society of Jesus. After further discernment, Asse’s decision to join the Jesuits was rooted in a deep desire to follow in the footsteps of St. Ignatius of Loyola, accompanying people and helping them make life decisions.

Benjamin Rogers, 25, was born and raised in Sioux Falls, South Dakota. He attended Creighton University where he majored in economics and played on the golf team. While studying at Creighton, he was first introduced to the Jesuits and Ignatian spirituality. Rogers spent the spring semester of 2021 living on the Pine Ridge Reservation as a donné with the Jesuit community.