On March 12, 2022, a Solemn Mass at the Church of the Gesù in Rome will commemorate the 400th anniversary of the canonization of Sts. Ignatius of Loyola, Francis Xavier, Teresa of Ávila, Isidore the Farmer, and Philip Neri.

Catholics worldwide continue to celebrate these witnesses of faith centuries later, as their example can nourish the spiritual life and human commitments of people today. As historian Fr. Tim O’Brien, SJ, said on the AMDG podcast (a production by the Jesuit Conference of Canada and the United States), the Church’s ongoing commitment to proclaiming saints is proof of God’s continuing care for us. 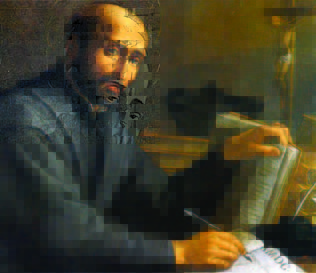 Well known to readers of this website, St. Ignatius of Loyola (1491–1556) is considered the patron saint of the Basque provinces of Gipuzkoa and Biscay, the Society of Jesus, spiritual retreats, and soldiers.

Another familiar Jesuit figure—St. Francis Xavier (1506–1552)—completed a stunning amount of missionary work in just 10 years. Patron of the Propagation of the Faith, missions, and his native Navarre, Spain, he is the only original Jesuit to have left Europe, and he has inspired a multitude of missionary vocations.

Like Ignatius, Francis was from a Basque noble family and had aspired to a worldly career earlier in life. By the time they met, Ignatius had experienced his conversion and encouraged Francis to look at his life differently. They were ordained priests together in 1537. 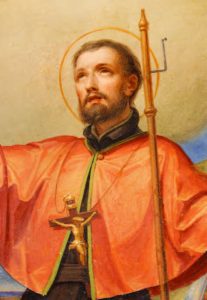 When, in 1541, King John of Portugal asked Ignatius for priests to send to the missions in India, it likely pained Ignatius to send his close friend Francis. But, true to his principle of detachment from anything that could interfere with bringing greater glory to God and helping souls, he sent his companion.

Francis was known for his boldness. When his party could not find a ship’s captain willing to take the risk of sailing into unknown waters, he hired a pirate to take them. He was also known for being flexible. While he left Europe sure of himself and his aims, he gradually recognized the value of other traditions. Francis learned the languages and adopted the Indigenous dress of the people he served, and he developed a deep sense of cross-cultural understanding for his time— appreciating God’s presence in all places (one might say “finding God in all things.”)

Ignatius and Francis were not the only friends canonized on that spring day in 1622. Considered the re-evangelizer of Rome in his time, St. Philip Neri (1515–1595) is now patron of that city, as well as the U.S. Army Special Forces, humor, and joy.

FOUR SPANIARDS AND ONE SAINT

17th-century Romans, who were most proud of their beloved fellow citizen, their “Pippo Buono” (Neri), quipped “Four Spaniards and one saint” when Philip was canonized alongside the four saints hailing from Spain. 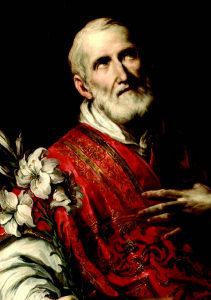 Thanks to Philip’s appealing nature, he enjoyed friendships among people from all societal levels, including Ignatius. Many of his disciples found their vocations during the Society of Jesus’ infancy, and Philip’s confessor was a Jesuit. Further, influenced by his friend Francis, Philip considered going to India as a missionary for a time, but others convinced him of the abundant work to be done in Rome.

Interestingly, Philip became known as the Second Apostle of Rome, after St. Peter, while Francis was compared to St. Paul for his prolific missions and was called the Apostle of the Indies and Apostle of Japan.

Philip is most known for founding the Congregation of the Oratory, a community that held meetings in a hall (oratory) to pray, sing hymns, read Scripture, and study religious questions. Today, the Oratorians are a pontifical society of apostolic life of priests and lay brothers who live in community bound together by no formal vows but with the bond of charity. Philip also founded the Confraternity of the Most Holy Trinity of Pilgrims and Convalescents to serve the poor pilgrims who flocked to Rome and to help patients who remained too weak for labor after being discharged from hospitals.

Even though he eventually became a priest and head of a new religious order, Philip took an approach similar to that of Ignatius— decidedly un-monastic and un-medieval. Both men realized something “ordinary” in character was needed for the emerging times. Philip took the approach even further, adopting traditions such as making a one- day pilgrimage to seven churches, from St. Peter’s Basilica to the Basilica di Santa Maria Maggiore, often with music and a picnic on the way.

That’s not surprising, considering some of the maxims attributed to him: “A heart filled with joy is more easily made perfect than one that is sad,” and “Cheerfulness strengthens the heart and makes us try harder to have a good life.” 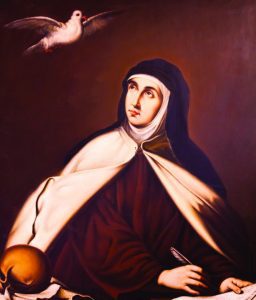 Saint Teresa of Ávila (1515–1582), also known as St. Teresa of Jesús, was born in Ávila, Spain, and entered the Carmelite convent in 1535. According to the Teresian Sisters website, she “longed for a deeper relationship with God, but due to the laxity of convent life in those days, she struggled [with worldliness].”

About 20 years later, Teresa experienced a mystical vision—like those recorded by Ignatius and Philip—that would mark the rest of her life. Coming upon a statue of the wounded Christ, she was suddenly and intensely moved by what Christ had suffered and what she felt was her lack of gratitude.

As a result of her conversion, Teresa set about reforming the Carmelite order, establishing convents throughout Spain. Thus, she became the founder of the Discalced Carmelites (the order is also known as the Barefoot Carmelites, because a discalced congregation is one that goes barefoot or wears sandals).

Teresa wrote extensively about her remarkable pathway to and communion with God. She is known for her use of the image of an interior castle with seven mansions, each containing many rooms, to communicate deep truths about prayer and the spiritual life. Encouraging continual conversion, Teresa described prayer as “being on terms of friendship with God.”

Like Philip, Teresa advocated for being “cheerful and unconstrained” in devotion, and she encouraged joy in the life of faith, writing, “I am more afraid of one unhappy sister than a crowd of evil spirits.”

In 1970 Pope Paul VI named St. Teresa a Doctor of the Church, the first woman ever to be recognized as such. She is also the patron saint of writers and of Spain. 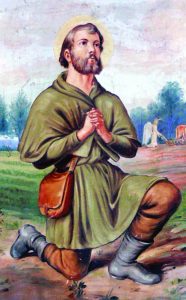 Living long before the other four people in this story was St. Isidore the Farmer (1070–1130). The patron saint of Madrid, rural communities and laborers, and the United States National Rural Life Conference, Isidore was born in Madrid and worked for the same landowner in a neighboring town his whole life.

Just as Ignatius exhorted us to look at the world in an incarnational way—to find God in all things—Isidore had great concern for the land and proper treatment of animals.

Known as a modest person and devout Christian, this poor field laborer (known in Spanish as San Isidro Labrador) upheld the dignity of work and demonstrated how an ordinary life without worldly status can lead to holiness. He rose early every day for Mass, but he also prayed continually while he worked in the fields. He and his wife María de la Cabeza, who is also honored as a saint, were known for their piety, hard work, and concern for the poor (whom legend says Isidore miraculously supplied with food).

Many Paths to Holiness

The stories of these five people demonstrate that no two saints are the same and that there is no one personality that leads to holiness.

Neither is there one way to live a holy life. Although Ignatius originally thought he should emulate the saints he considered heroes, he came to learn he needed to forge his own path.

Yet there is at least one characteristic all of these individuals share. Ignatius might have codified the idea of being a “contemplative in action,” but all five saints could be described this way.

For example, Philip’s days were dedicated to helping others, but his nights were set aside for solitude and prayer. Teresa reformed a religious order without neglecting her friendship with God. Isidore is known for praying while he worked. Francis spent his days preaching, baptizing, visiting prisons, ministering to lepers, and creating flourishing churches. Yet he also had a rich prayer life.

Descendants of Jesuit Slaveholding and Jesuits of the United States Announce Historic Partnership
In a landmark undertaking in the pursuit of racial healing and justice, Descendants of ancestors enslaved and sold by the Jesuits, together with the Jesuits of the United States, have announced a partnership to create the Descendants Truth & Reconciliation Foundation.
Publications, Story
Patna Jesuits’ Centenary Celebration
One hundred years of service is a remarkable achievement, and the Midwest Province offers congratulations and thanks to all who have dedicated so much to the region over the years, and of course, to the people of Patna as well.
Events, News
A Heart on Fire: An Itinerant Life
My single greatest hesitation in entering the Jesuit novitiate had nothing to do with vows of poverty, chastity, or obedience. It was all the moving around that got me. “Can you really form lasting and loving relationships while constantly on the road?”
Publications, Spiritual