The Midwest Jesuits are pleased to announce that Jen LaMaster has been named associate provincial assistant for secondary and pre-secondary education. LaMaster will replace Brendan Conroy, who will move to Mount Carmel High School in Chicago to serve as president.

LaMaster comes to the Midwest Province with extensive experience in Catholic and Jesuit education, having spent the past 14 years as assistant principal of Brebeuf Jesuit College Preparatory in Indianapolis. In her role at Brebeuf Jesuit, LaMaster has long been a leader in Jesuit Schools Network programming. LaMaster is sought after for her keen sense of innovation rooted in the Jesuit mission. With her good cheer, deep faith, and genuine care for her peers in this work, LaMaster is well-equipped to serve the Midwest Province’s schools and incoming Provincial Fr. Karl Kiser, SJ. For many years now, LaMaster has led the province’s Ignatian retreat for new employees, as well as Conference-wide programming through the Arrupe Virtual Learning Academy.

After an exhaustive process that considered many impressive candidates, LaMaster was identified as the ideal candidate for this role. In the process, LaMaster interviewed with multiple stakeholders from schools throughout the province. Provincial Fr. Brian Paulson, SJ and his successor, Fr. Kiser, each had time to interview LaMaster, as well. Several of LaMaster’s colleagues in leadership from Brebeuf Jesuit were also consulted in this process, and the province is grateful for their support of LaMaster’s candidacy, even as it would result in losing an important school leader late in the academic hiring cycle.

La Master is originally from Dayton, attended Bradley University, and has held leadership roles in schools in rural and urban settings. LaMaster and her husband George have two children, Linnie Grace (21) and William (16), an alumna of and current student at Brebeuf Jesuit, respectively. LaMaster is a parishioner at St. Monica Parish in Indianapolis.

While LaMaster will spend a significant amount of time in the province’s Chicago office and, of course, around the Midwest Province, her primary office will be in Indianapolis. We extend a warm welcome to her! 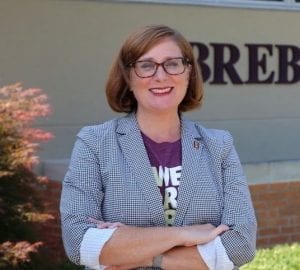 The Midwest Jesuits thank Brendan Conroy for his years of service. Conroy has served the province well with his wise counsel, tireless work ethic, and impeccable integrity. We wish Conroy well as he moves on to Mount Carmel High School.