Let us pray in thanksgiving for the life of Fr. Joseph F. Eagan, SJ, who died on December 20, 2022 at St. Camillus Jesuit Community in Wauwatosa, Wisconsin. He was 100 years old. May he rest in peace.

Joe was born in Avoca, Wisconsin on October 29, 1922. He graduated from Campion High School in Prairie du Chien before entering the Missouri Province of the Society of Jesus at St. Stanislaus Seminary (in Florissant, Missouri) on September 1, 1940. He became a member of the Wisconsin Province when it was formed in 1955. He had the usual Jesuit course of studies at St. Stanislaus, Saint Louis University, and Saint Mary’s College. He was ordained on June 17, 1953 in St. Mary’s, Kansas, and pronounced final vows on August 15, 1956 at Campion High School.

During regency, Joe taught English and speech at Creighton Preparatory School (1948-1950). For a decade after ordination, he taught at Campion Jesuit High School (1955-1962) and Creighton Prep (1962-1965). Joe then spent almost three decades ministering in Jesuit universities: Director of Campus Ministries at Creighton University (1965-1971) and Professor of Theology at the University of San Francisco (1975-1993). At the age of 71, Joe shifted his ministerial focus to parish ministry in the San Francisco Bay area. He was an associate pastor (1994) and parochial vicar (2006-2009) at St. Anselm Parish in Ross and an associate pastor at St. Patrick Parish in Larkspur (1994-2006). He was missioned to St. Camillus Jesuit Community in 2010 where he wrote and engaged in pastoral ministry.

Joe was an energetic, engaging Jesuit priest with wide interests. He followed church affairs very closely and both taught and wrote a lot about Catholic theology after Vatican II, with a special interest in ecumenism. He loved to travel, and traveled a lot. He had many friends, both in and outside the Society. He enjoyed life and helped others to enjoy life.

During his time at USF, Fr. Eagan was an avid fan of USF athletics. He wrote “Dynasty, the Story of USF Soccer, 1931-1997”, and oversaw the Negoesco Stadium project, whose concept was born from a discussion between Eagan and Negoesco on a plane ride home from the 1978 National Soccer Championships. [He rallied USF alumni and boosters for $150,000 of the total $175,000 budget.] Negoesco Stadium opened in 1978 before a crowd of 3,000 supporters. He was inducted into the USF Athletics Hall of Fame in 2018.

Fr. Doug Leonhardt, SJ, had this to say about Joe:

Joe had an indomitable capacity for scholarship, friendship, and pastoral care. When he left teaching at USF, he honed his educational skills to bring alive Vatican II in the parishes he served in California. When he came to the Jesuit Community at St. Camillus, he kept up his friendships with people from all around the country. He read voraciously. Instead of joining the community for lunch each day, he had lunch in the haustus room so he could keep up with a variety of periodicals. Until COVID, he gave an update about what was going on in the Church and lead a theological discussion every two weeks with the residents in independent living at St. Camillus. Joe never retired intellectually; he just slowed down physically in his 90s.

Fr. George Winzenburg, SJ, had this to say about Joe:

Joe celebrated his 100th birthday with gusto on October 29, 2022. Friends from California and elsewhere joined the Jesuits in Milwaukee for Mass and dinner at St. Camillus Jesuit Community. Joe gave a heartfelt and humorous speech at the social hour. He received many cards congratulating him. Two were special. His longtime friend, Cardinal Robert McElroy of San Diego, sent a hand-written note. Best of all, Joe received a letter from Pope Francis, whom he deeply admired.

Joe was very close to his younger brother, John, who entered the novitiate after graduating from Campion High School. They shared an enthusiasm for Vatican II, social justice, and the joy of teaching adolescents and young adults. John taught theology at Marquette University High School for many years and died of pancreatic cancer at the age of 61 in 1987. Joe remained close to another younger brother, Gene, and attended his funeral on June 17. 2022

Joe’s life was shaped by his loving family and many friends, by the Spiritual Exercises, by his formation as a Jesuit, his ordination and his administration of the sacraments, by the vision and theology of Vatican II, and by his teaching and parish ministry.

Joe ended his last publication, Friends, with these words: “I thank God every day for the amazing blessings and many good friends of my rich Jesuit life – and now, here at Camillus, for the inspiration of my Jesuit brothers, their nearness to God, their acceptance of diminishment and suffering, and their strong faith. Plus, they’re fun to be with. I’m so blessed. As the English mystic Julian of Norwich never tired of saying: ‘All is gift.’” 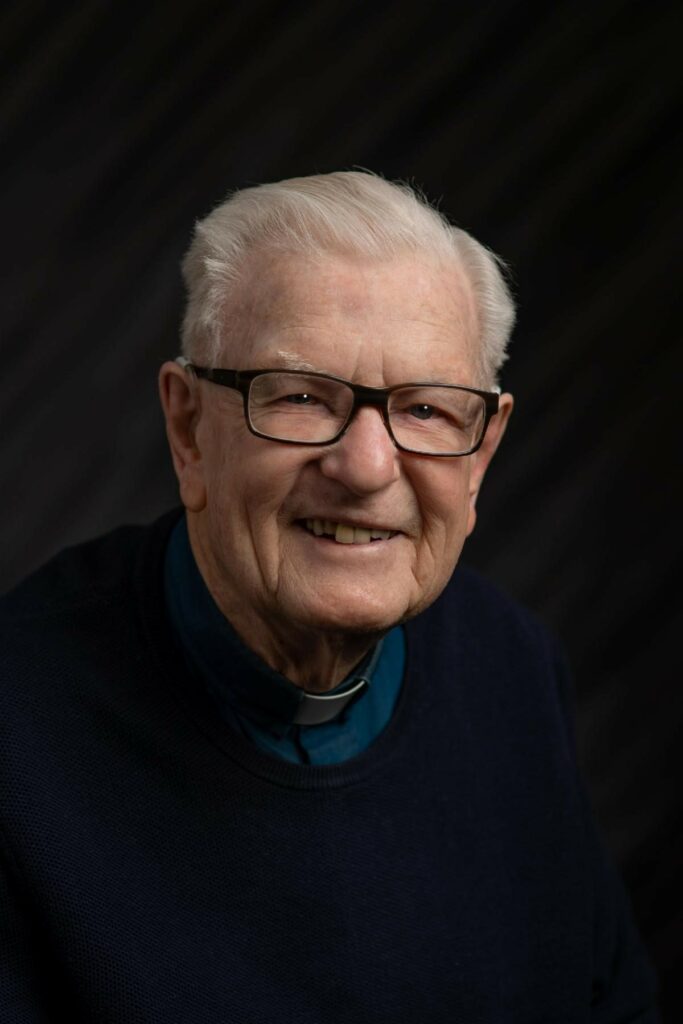