One Distinctive Aspect of Jesuit Education at All Levels Is the Emphasis on Teaching “the Whole Person” — Mind, Body, and Spirit. 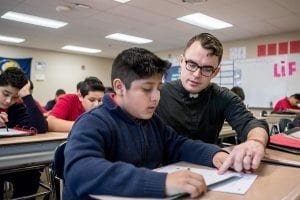 The Society of Jesus began, appropriately enough, with a bunch of college students living far from home.
A little over a decade later, the first Jesuit school opened in Messina, Sicily, in 1548. Today, 3,730 schools carry on this tradition all around the world, caring for 2.5 million students in places ranging from Egypt and Kenya to Nepal and Belize. In Canada and the United States, there are 30 Jesuit colleges and 81 pre-secondary and secondary schools with a shared goal of developing competent, compassionate and committed leaders in the service of the Church and society.

One distinctive aspect of Jesuit education at all levels is the emphasis on teaching “the whole person” — mind, body, and spirit.

The schools foster not only intellectual development, but also moral and spiritual growth. At the high schools, the aim is to produce students who are “open to growth, intellectually competent, religious, loving, and committed to doing justice” by the time they leave. Those are five characteristics pinpointed by the periodically updated Profile of the Graduate of a Jesuit High School at Graduation, better known as the “Grad at Grad” report.

Men and Women for Others

In recent decades, Jesuits have broadened this mission in part by reaching out to high school students in urban America. Dozens of these schools — either sponsored by the Society or otherwise modeled on Jesuit education — have been started around the country. Geared toward students in high-poverty neighborhoods, the schools offer high-quality education and charge little or no tuition. Their graduates go on to selective colleges — ready to serve and develop their full potential.

And so, these and other Jesuit-related schools reflect a contemporary Jesuit mission: advancing the faith through the promotion of justice.

Take Part in a
Jesuit Retreat​

In Memoriam: John W. O’Malley, SJ
Let us pray in thanksgiving for the life of Fr. John W. O’Malley, SJ, who died on September 11, 2022, at the St. Claude de la Colombière Jesuit community in Baltimore. He was 95 years old. May he rest in peace.
Story
Papal Politics and the Canonization of Ignatius and Francis Xavier
Nearly 500 years after the founding of the Society of Jesus, St. Ignatius Loyola and St. Francis Xavier are widely revered and respected. It wasn’t always so.
Story
Five Saints, One Canonization
On March 12, 2022, a Solemn Mass at the Church of the Gesù in Rome will commemorate the 400th anniversary of the canonization of Sts. Ignatius of Loyola, Francis Xavier, Teresa of Ávila, Isidore the Farmer, and Philip Neri.
Story